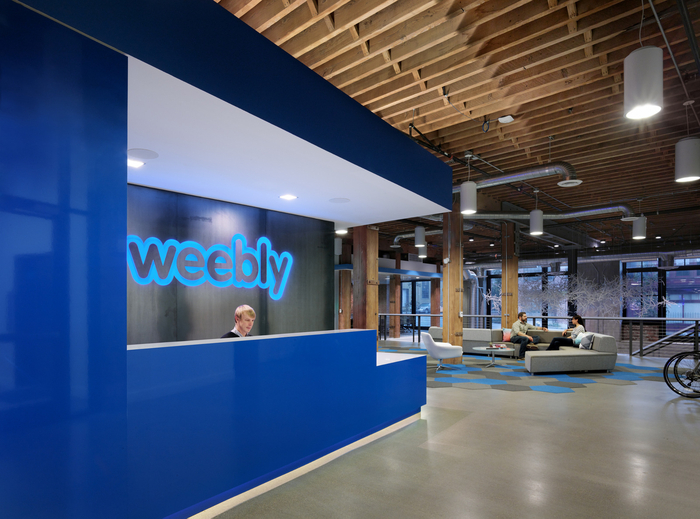 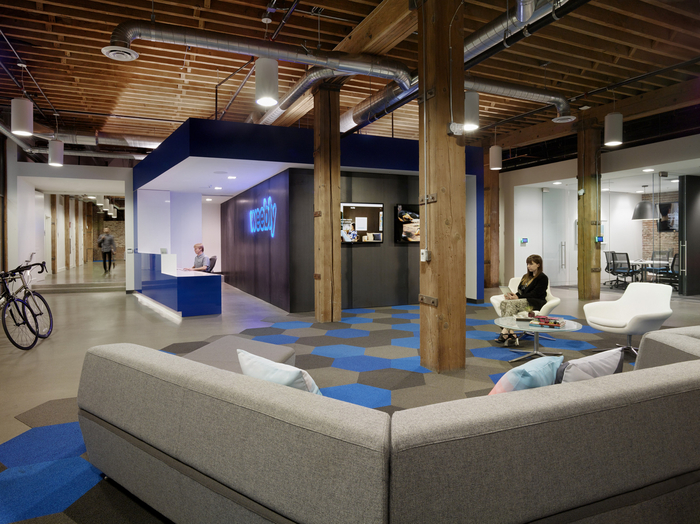 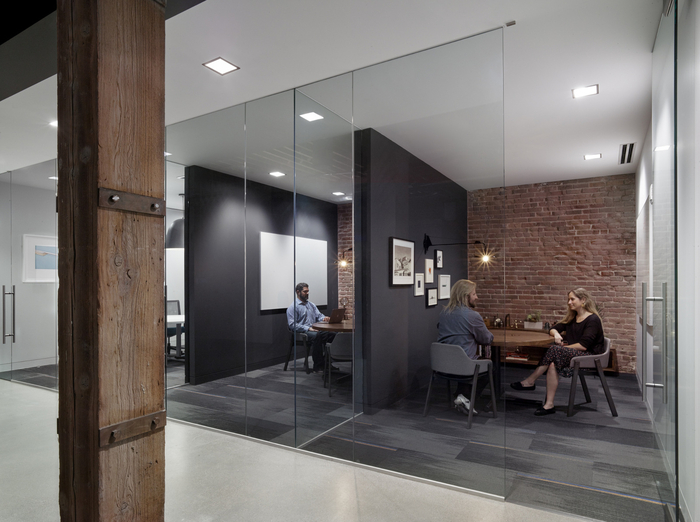 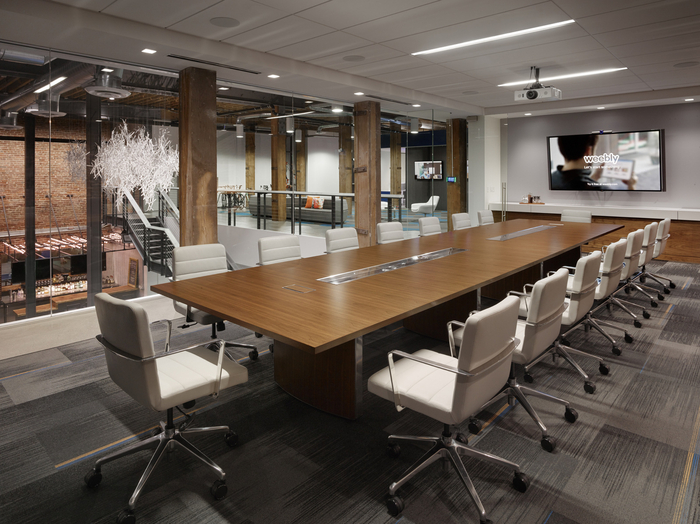 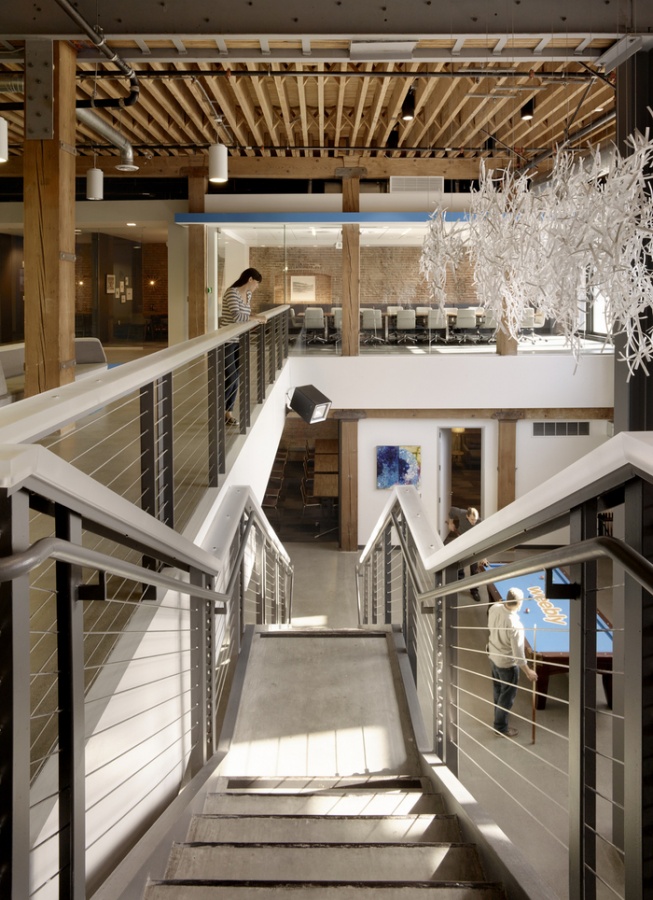 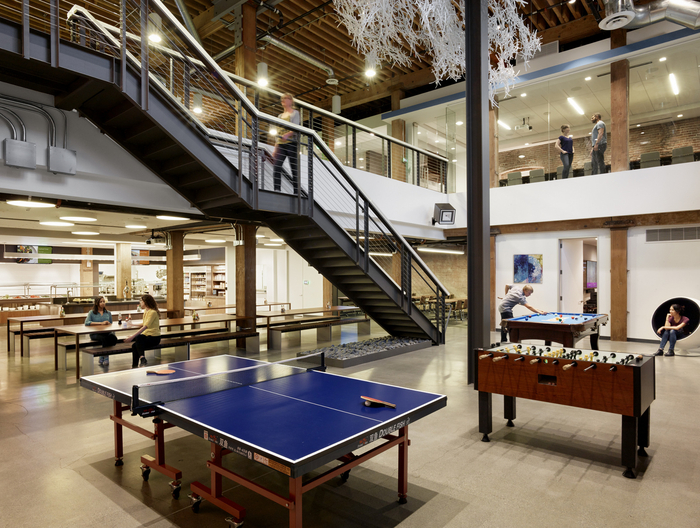 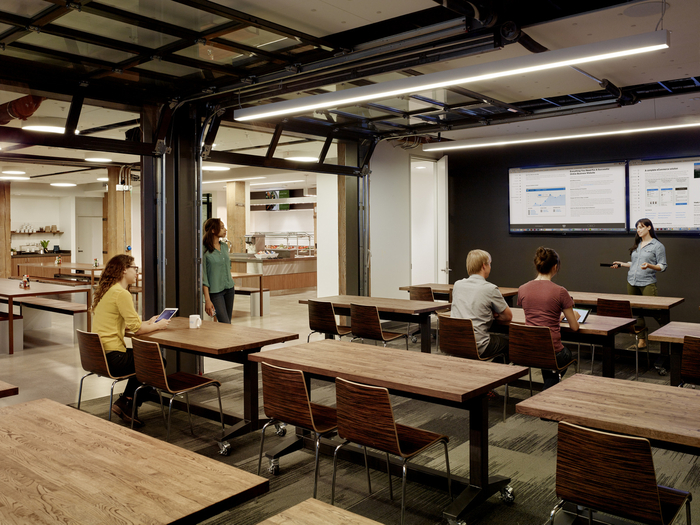 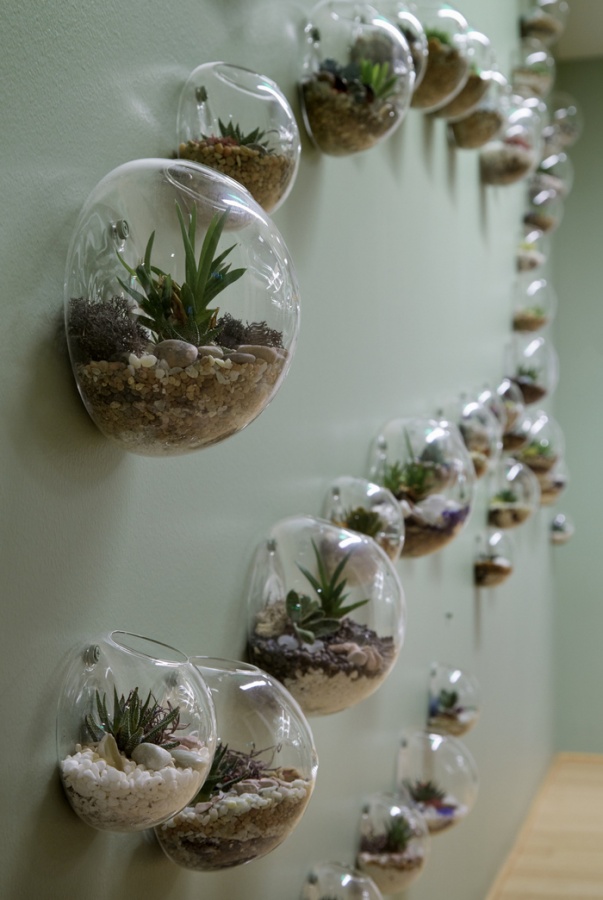 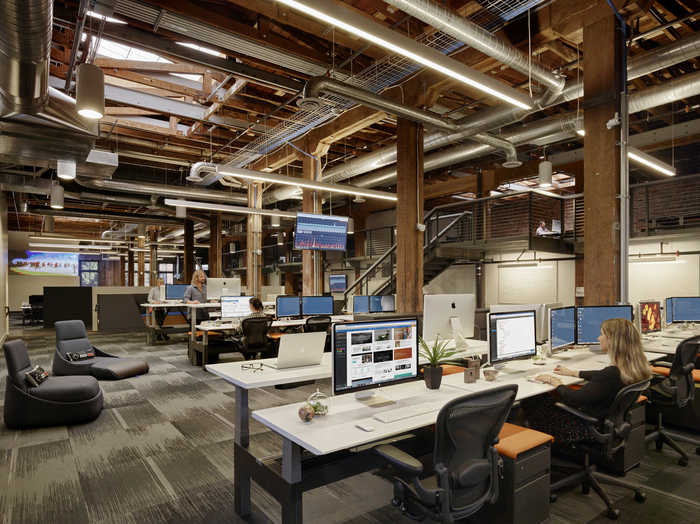 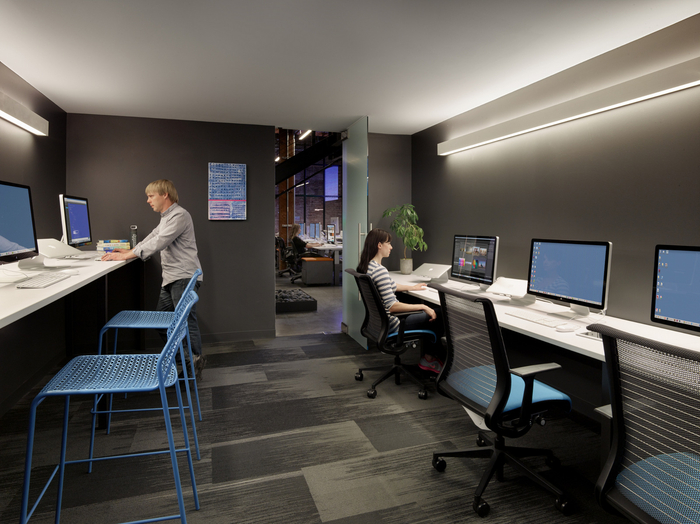 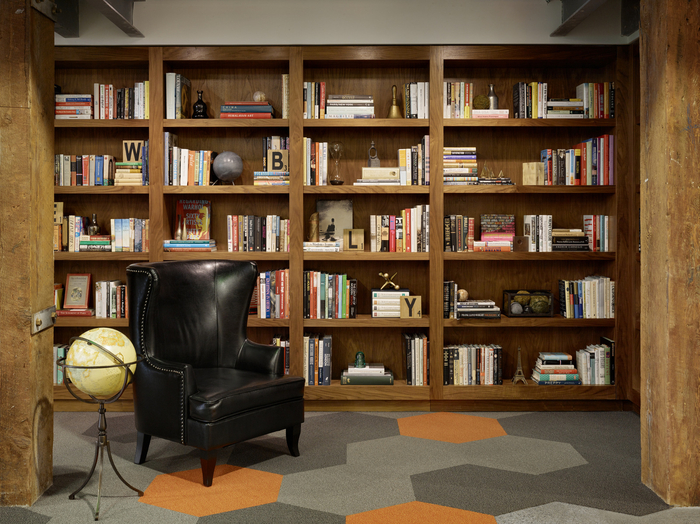 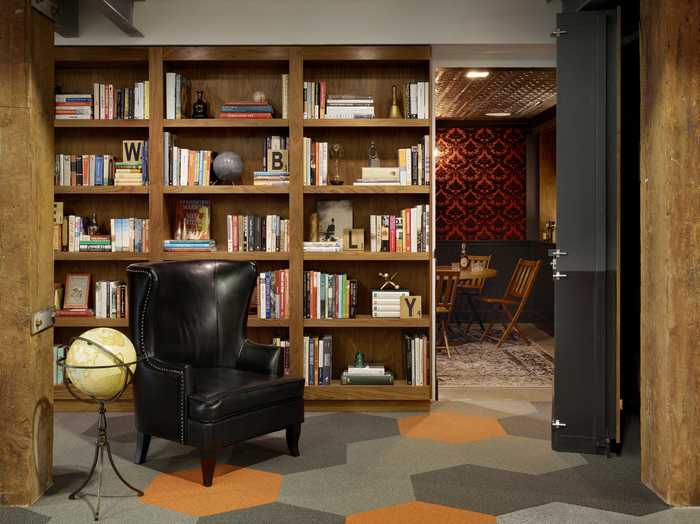 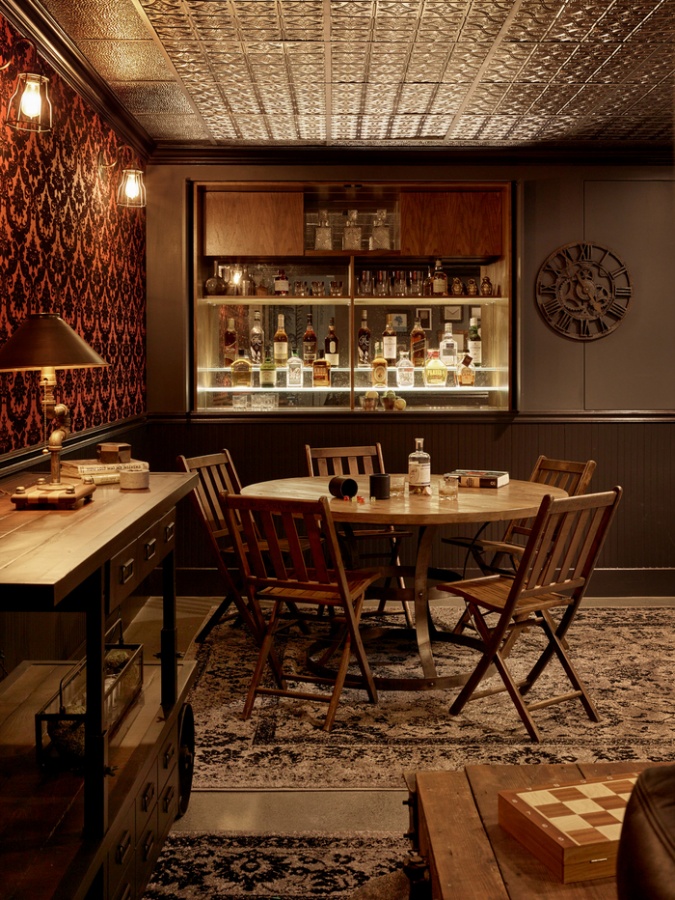 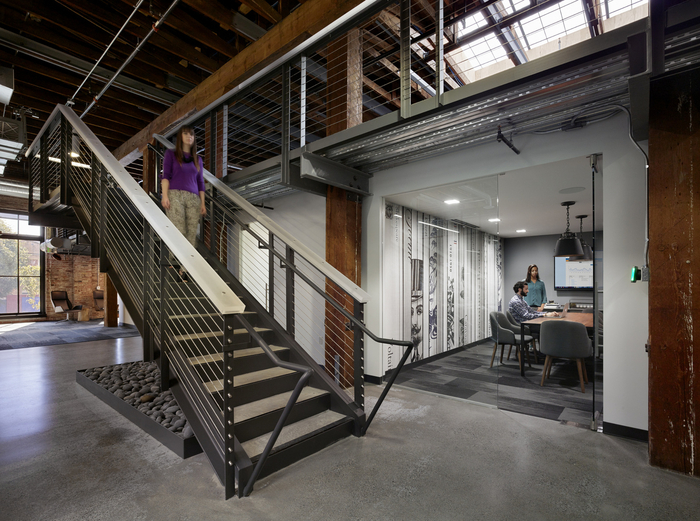 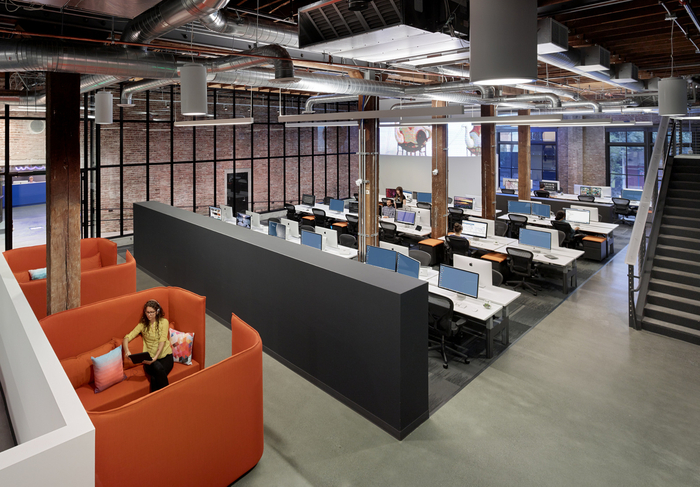 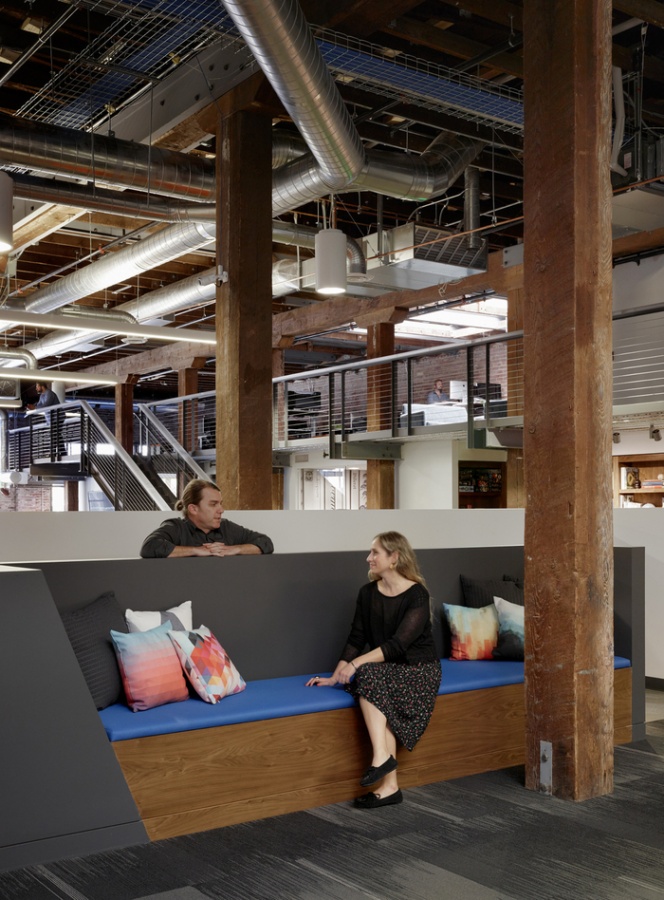 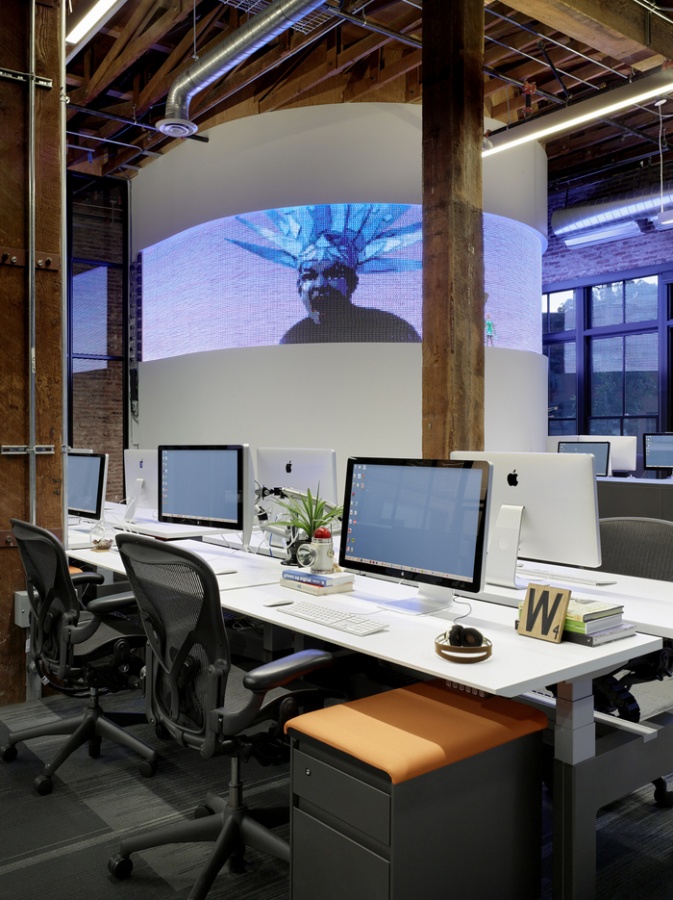 A leader in consumer-based website design and hosting, Weebly creates easy-to-use and affordable tools which empower business owners to follow their passions – in short, to “start your something.”  The company’s rapid success resulted in the need of a new headquarters just two years after having relocated to a historic brick building in San Francisco’s Jackson Square.  Looking to expand its footprint threefold, Weebly was drawn to another warehouse, this time in the City’s SoMa district.  Built in 1907, 460 Bryant was originally built for liquor distribution until Prohibition ended that business. The building’s later uses included a type foundry and even a venue for after-hour raves. In 2013, Sierra Maestra Properties purchased 460 Bryant and started the renovation and seismic retrofit for its next life as a multi-tenant office building.

While 460 Bryant resembled Weebly’s previous (also Huntsman-designed) space with exposed brick, steel, and concrete sheer walls, it also presented new opportunities due to a much larger scale. The design team’s master plan and phasing strategy allows Weebly to expand into additional floors over time.  Important to the company’s founders, the built environment needed to reflect Weebly’s culture and brand in a tangible way:  Open, approachable, and high quality. They also wanted employees to feel excited about coming to work, so workspaces needed to be augmented with just the right mix of amenities.

The building’s dramatic 60’ long entry ramp bisects the ground floor into distinct wings. The east wing houses Weebly’s public functions – reception, lobby, boardroom, and interview rooms, while the west wing contains a variety of workspaces.  Throughout the facility, 14 different conference rooms vary in size to accommodate anywhere from two to 20 people. The boardroom and lobby overlook a large, light-filled floor opening and stair to the basement (both part of the base building renovation).  Suspended above this opening, the designers placed a 650-pound sculpture by artist Matt Devine, made of elliptical steel fins.

Downstairs, a host of amenities include a dining area which seats 200 comfortably on long picnic benches – a tradition carried on from the company’s early days when its first dozen employees all shared meals communally. Glass garage doors reveal an adjacent training room which also provides additional seating.  Food offerings, prepared by a resident chef, reflect Weebly’s commitment to employee health.  Salads, sandwiches, and meal specials are offered daily, but you won’t find any deep frying equipment behind the counter.  A fitness center, showers and changing rooms, mother’s room, and massage rooms also contribute to staff wellness.  A cocktail bar and DJ booth round out the fun features on the basement level. During company parties, Weebly’s CEO, David Rusenko, can often be found serving up his custom cocktail of electronic dance music.

Weebly’s open, collaborative environment features multiple work settings, levels of privacy, and a benching solution that gives each user the ability to work sitting or standing. As a way to celebrate its online customers, Weebly incorporated some unique components into the interior design including origami lounge furniture, organic paintings and collages, and wall-mounted air plant holders – all creations Weebly customers now sell online.  At the front of the building, a curved wall behind an accessible entry ramp in the building lobby became an opportunity on the tenant side. A custom 36,000 LED pixel system displays both digital still images and video.  Weebly founders met the creators of PixelPusher at Burning Man and have even helped promote the product while it was still in development.

Under a mezzanine, a number of rooms and lounges offer more quiet places to work.  One meeting room takes design cues from previous forms of media, including classic literature. Next door, a favorite feature from Weebly’s prior location was recreated at 460 Bryant:  A secret room, harkening back to the building’s prohibition era past, is entered through a hidden door within a library bookcase. Once inside, flocked velvet wallpaper, exposed-filament lighting, and period furniture, create a perfectly vintage atmosphere for sharing a whiskey – or perhaps the next great technology idea.